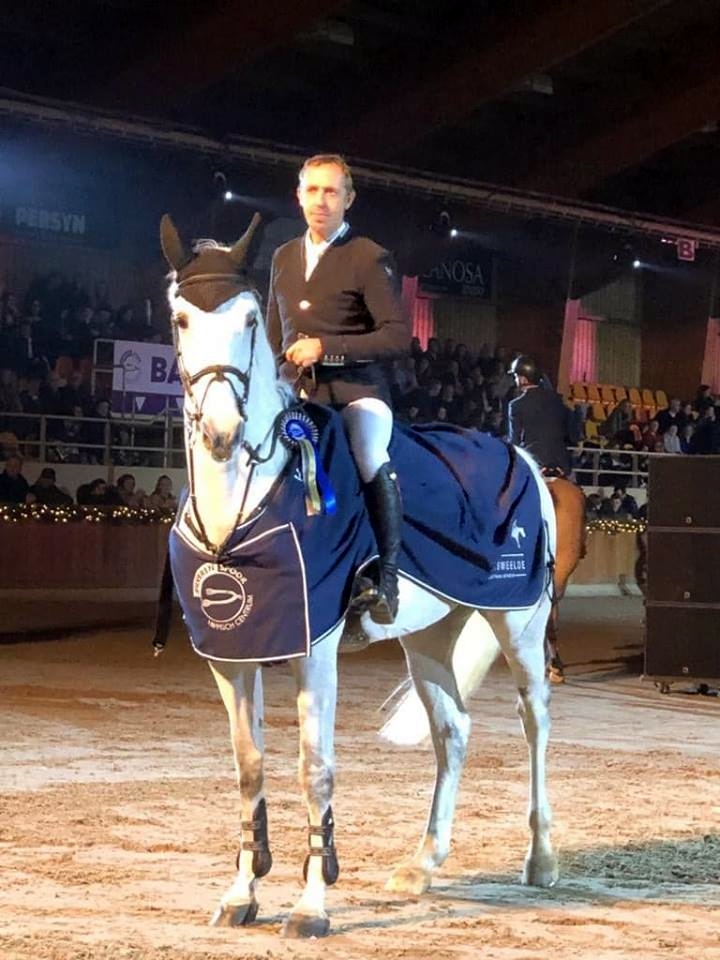 In the Lier CSI, from the 18th to 21st of October, Ulyss Morinda returned to competition and benefitted immediately by being placed in the 1m45 Grand Prix. He was flying.
Following this, at the 3* CSI in Opglabbeek at the start of November, it was the turn of Urbane de Puychety to star. The mare, who is competing at 1m40 level with Rik, had a double clear and was even placed 2nd on the Saturday. A good omen…
Tum Play du Jouas had some very nice rounds over 1m40 and 1m45, seeming very relaxed.
Then from the 15th to 18th of November, the superb 4* CSI show, the ‘Equiseine Rouen', produced several surprises and also brought some good placings.
Urbane de Puychety got the ball rolling in the opening class on the first day. She won a lovely 6th place in the 1m35. The following day it was the turn of Cassamoon to imitate her, in another 1m35 class where she was placed with a classy double clear.
Ulyss Morinda was a bit out of luck in the two 1m50 qualifiers where he finished with 4 faults each time. In particular on the Friday when he just tipped the pole on the last fence with a hind hoof. So there was no jump off for him, which was a great pity as Ulyss is speedy against the clock. He jumped brilliantly, though.
Rik and Ulyss qualified for the 1m60 Grand Prix on the Sunday (being amongst the best 50 pairings) but didn't get the measure of the big double, which Ulyss didn't succeed in jumping. He lost his bridle, which forced them to abandon the round! They left the ring in an astonishing fashion, that will be remembered for a long time, and proves their incredible mutual trust. Rik sat quietly on Ulyss, without a bit nor reins to control his horse in the arena, passing the next horse entering the arena, with a very worried commentator, who asked the public not to make any untoward noises! He'd never seen anything like it!
Ulyss then departed for the harvesting of semen as he had to produce straws for not only Europe but also for countries such as the USA and Mexico.

For her part, during the Rouen Equiseine, Anne-Sophie went to the 2* CSI at Moorselle (Zilveren Spoor), in Belgium with Morfine de Muze and Etoile by Mdl. The latter brought a good placing in the most important class of the show, the 1m45 during which Morfine gained experience thanks to good working rounds.

Shared Competitions
From the 22nd to the 25th of November, Rik and Anne-Sophie went to the CSI at Lier – Azelhof (BE). A very successful show.
To start the show off, Deesse de la Sure was placed on the first day with Rik in a 1m40 class. But the climax took place on Sunday 25th during the 1m45/1m50 Grand Prix, the major class at the show, where Rik completed a very good clear round with Tum Play du Jouas, rapidly copied by Anne-Sophie, also clear with Etoile by MDL.
During the jump off over 1m50, which was contested by 16 out of the 71 starters, our two horses both went clear again. Rik finished 6th and Anne-Sophie was 8th. A superb Grand Prix!
The next show, the BMW Le Couter Prestige Cup 2 at Moorsele, from the 6th to 8th of December, brought a deluge of placings and a victory in the Grand Prix for Rik.
On the first day, Urbane de Puychety, ridden by Rik, brought home a good 4th place in the 1m40 class.
The next day, it was the turn of Qarmina de Greenbay Z, with Anne-Sophie, who went clear in the 1m30. Then the 1m40 saw Etoile by Mdl with Anne-Sophie, and Deesse de la Sure with Rik both placed, both with clear rounds. Neither of them went in the jump off in order to save their energies for the Grand Prix the following day.
Finally, Saturday began with a placing for Qarmina de Greenbay Z, this time in the 1m35 class. We should salute the consistency of this young 8 year old mare who is very promising! Morfine de Muze, 6 years old, finished her round with just one time fault with Anne-Sophie – a very pleasing result.
The 1m45 Grand Prix crowned this wonderful weekend : there were only seven clear rounds from amongst the 61 participants. Etoile by Mdl and Deesse de la Sure had two of the clears and both managed second clear rounds in the jump off!
Rik and Deesse won the class with a jump off time nearly 2 seconds clear of the horse that finished second, and Anne-Sophie came 4th. BRAVO!

Join us again in 2019 and Happy Holidays to all of you!