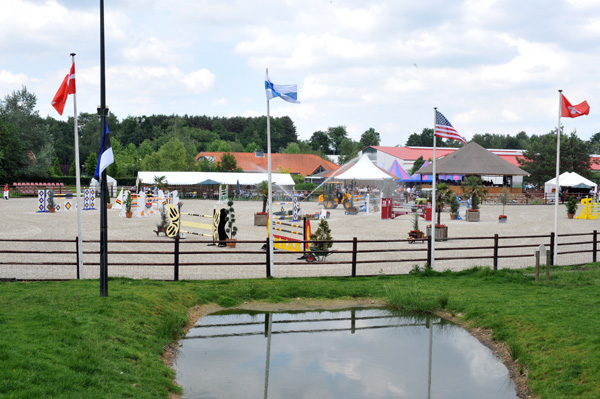 While some horses were remaining training, others resumed competition at the national of Neeroeteren.

The seven-year-old horses were very promising on this show jumping. For  her second competition under Rik’s saddle, Déesse de la Sure listened closely to her rider and thus completed two perfect courses. “It’s a mare which only asks to learn and evolves well.” Registered on classes quoted in 1.30m/1.35m, Jule de Lauzelle and Jarvi de Sclef made very encouraging classes. “Jule gave me a good feeling and Jarvi realized a useful training for next events.” Concerning Jewel Van’t Eigenlo, she illustrated herself on classes quoted in 1.35m/1.40m. “Even if the mare let a bar fallen on both of her courses, I’m stil pleased with her evolution and confident for the future.”

Arrived at the stables recently, Il Mio Van’t Eigenlo and Vip du Tintia appeared to have solid resources for show jumping which let thinking of a great future. “The horses jumped well and stay favorable disposed on the arena at any moment.” Vip du Tintia notably signed two rounds without penalty.

Conrad continues to gain experience show jumping after show jumping. “Some adjustments still need to be done so that the horse can become regular and more relax on the arena.”

Casall’s daughter, Cassamoon (alias Casallina), today works on national competitions under Anne Sophie’s saddle. “Still learning, the mare took a lot of experience on Belgium competition arenas. I’m rather satisfied with her weekend, she seems to be ready for her next international event which will take place in two weeks in Bonheiden.”

Back in competition after some weeks of absence, Vidretta M de Bellignies and Fame Van de Plataan trampled the arena of a class quoted in 1.20m on Saturday. “It’s a gently resumption for the two mares which were both assiduous and respectful towards the bars.”

Generally speaking, the horses listened closely to their riders and were promising for their next events. The same horses will remain training on the national competition of Loenhout from Saturday 18th, June.