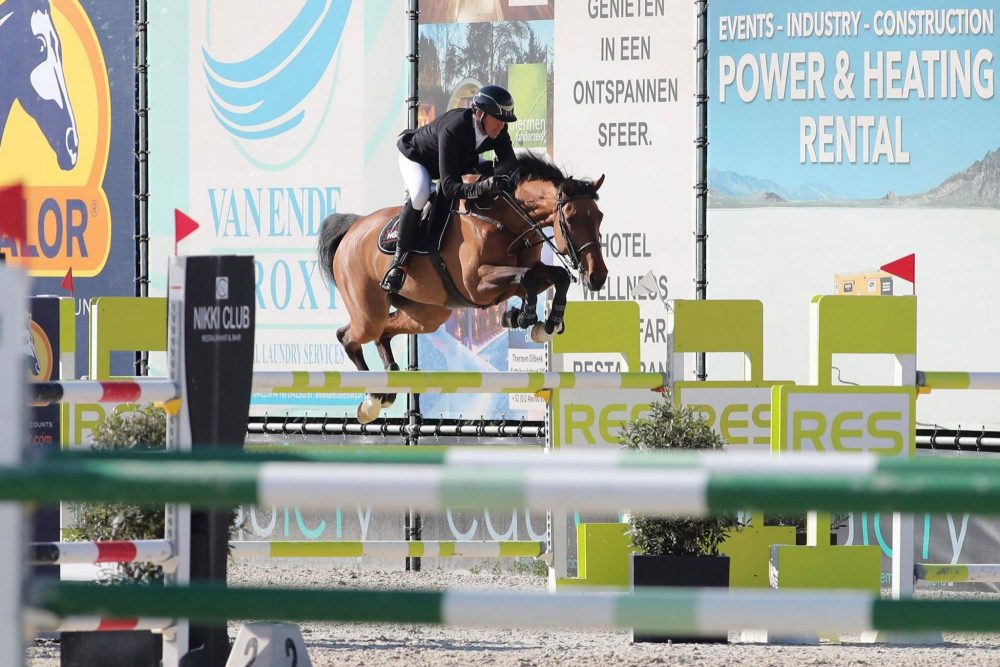 Rik got into gear for the season early on : from the 7th of February he was off to Lier Azelhof with several horses including I Diego de la Sure, who has joined his string.

Loupiac de Sclef was the first to achieve a placing this year.

For his second outing, between February 21st and 24th, Rik headed for Holland, arriving at the Peelbergen Equestrian Centre in Kronenberg for a CSIYH and a 2*CSI.

On the first day, he completed three courses with three clear rounds with Jarvi de Sclef, I Diego de la Sure and Morfine de Muze who took 4th place in the CSIYH. The horses are evidently really happy to be competing again and the work of the past few months has brought them to peak condition.  By the way, Jarvi de Sclef, competing in the biggest competition of the day, easily qualified for the Grand Prix!

On the second day, Friday the 22nd, Morfine de Muze went clear again followed by Loupiac de Sclef who took to the stage and produced a magnificent round. He and Rik finished second in the class, only a half second off the eventual winner. On the podium were Denmark, Belgium and Germany!

It was Urbane de Puychety who brilliantsly concluded the competitions with a victory.

While waiting for the return to the fray of Ulyss Morinda and Rik's other older horses, the youngsters have shown us that we can count on them just as well!

On the 5th of March, the two horse boxes from the HGS stables set off for Villeneuve-Loubet with Rik and Anne-Sophie. They stayed there for the two CSIs, until the 17th of March. There were too many placings to mention all of them here : Rik, with Cassamoon, Tum Play du Jouas, Morfine de Muze and Ulyss Morinda (who calmly resumed competing in the 1m35 and 1m40 classes) was placed numerous times. Notably he had a lovely 2nd place with Morfine de Muze in the CSIYH.

With Anne-Sophie, it was the two mares Quarmina de Greenbay Z and the young Classe de Favi who accumulated places of honour.  Quarmina, in particular, was placed five times including three lovely 2nd places in the 1m35 and 1m40 classes.

Upon his return, Rik went to Lier where he made a successful raid in the company of Deesse de la Sure (3rd), Urbane de Puychety (2nd twice), I Diego de la Sure who won a class and Loupiac de Sclef.

On the 28th of March it was off to Bonheiden for Rik and Anne-Sophie. Even more lovely placings. In particular, Urbane de Puychety, who was very much on form, brought about a new win and a 5th place. Like the previous week with I Diego, no one amongst the 90 starters could catch Rik. I Diego de la Sure produced a good 6th place. On her side, Anne-Sophie unleashed a lovely clear round with her seven year old, Classe de Favi.

The following weekend, still at Bonheiden, Rik took part in the two CSI's – the 2* and the 3*. On the first day he had three horses jump clear. Cassamoon was 3rd in his class and Ulyss Morinda just walked the 1m40 fences. He took advantage of the course and was placed as well. On the second day, Cassamoon, still on good form, produced a 4th place in the 1m40, and Loupiac Sclef was 5th in the 2*. As for Ulyss, he had to make no effort at all in the 1m35. Just a warm up for him.

Sunday marked the grand return of Ulyss Morinda. The first 1m50 Grand Prix of the year where he unleashed two magnificent clear rounds over a course that was both big and technical.  Rik and he immediately took up where they'd left off, and were 4th out of 9 through to the jump off. The stallion didn't so much as touch a pole either in the ring or in the practice arena. Ulyss flew! A very good omen for the 2019 season.