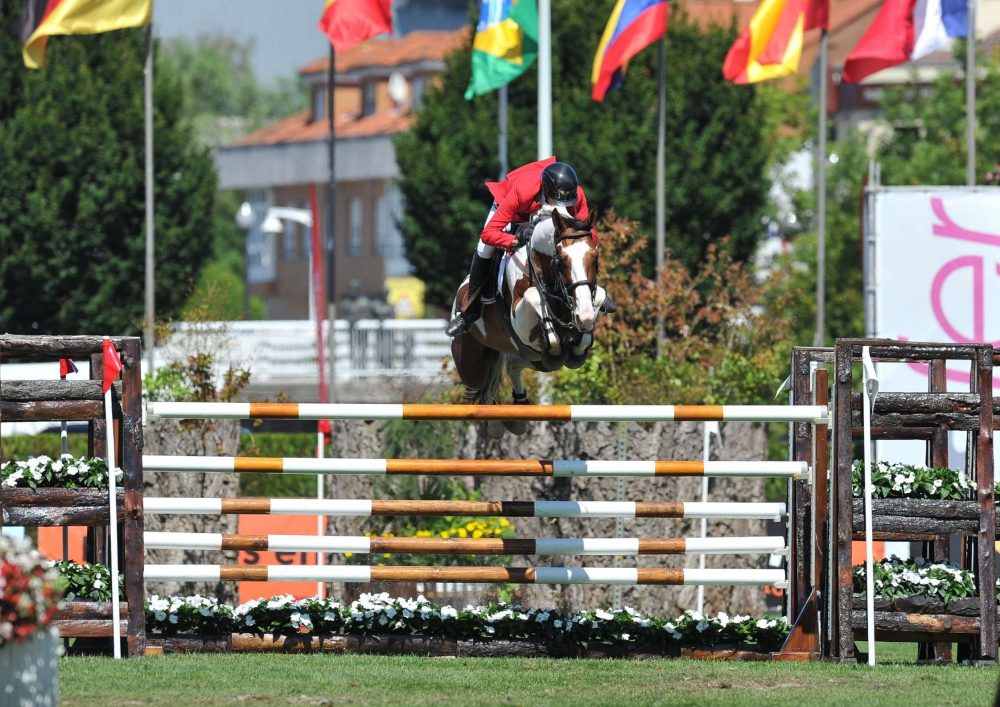 In July, August and September, the Hemeryck Godart Stables were present on every front with numerous horses, and all of them showed great achievements. An intense and flamboyant summer!

There was a second CSI for Rik at Knokke Equine, after the one in June, where the horses were very successful:
– Deesse de la Sure was placed in a 2* 1m45 class,
– the stallion, Ulyss Morinda, did the same but over 1m45, in a 3*,
then in the wake of this success, he participated in the 1m55 Grand Prix where he would have won but for 4 faults at the last fence. His was the only clear round in the jump off. He was placed, all the same.
– Jules de Lauzelle also shone in the 3* 1.40m.

X-BIONIC at SAMORIN, (Slovakia) over some exceptional courses

– Ulyss Morinda was placed in his first 1m60 Grand Prix and therefore proved that the very large grass tracks don't faze him. The future is his and Rik's to be seized!
– Jarvi de Sclef was placed in the superb 1m45 4* Derby
– Cassamoon (aka Casallina), as for her, she took 3rd place in a 1m35/1m40 class at CSI 2*. She also produced a double clear over 1m45.
– Tum Play du Jouas was not left out, also going clear in a 4* 1.45m
– Rik produced three 1m25 placings with Luna Aeg, a mare from the Guéry stables that he was given the ride on after only a moment’s notice.

– The young Qarmina odeGreenbay Z (an 8 year old) took a very nice 4th place in the 1m35 / 1m40 event, just behind Cassamoon,
– Vidretta M of Bellignies was also placed in a 1m40 / 1m45
– Etoile by MDL got a lot of attention with three places over 1m45 and especially in the Grand Prix final which was at 1m45. He was even in the lead after the first round.

– Jarvi de Sclef and Déesse de la Sure both were both placed in the 1m40 event,
– Ulyss Morinda produced a magnificent round in the difficult Longines Grand Prix, unfortunately penalized by one mistake.

Ridden by Anne-Sophie :
– Etoile by MDL was placed in the 1m45
– Qarmina de Greenbay Z produced a 5th place in the 1m35.

Also in August, Anne-Sophie went to the magnificent contest in Brussels, while Rik, selected by the federation, left for the 5* CSIO in Gijon, Spain, with Ulyss Morinda and Deesse de la Sure
– Deesse de la Sure was placed over 1m40 and participated in first 1m55 class.
– Ulyss Morinda:
– Took part in two events over 1m40 where he did not touch a pole
– Was part of the Nations Cup Belgian team: a team placing for his first participation at this level. In two rounds over 1m60 he had 8 faults and then 4 faults. He was partly responsible for the team qualifying for the second round and therefore for it being placed.

– MISE AU REPOS :
– Ulyss Morinda as well as Jarvi de Sclef were given rest and recuperation for five weeks.

– Loupiac de Sclef has become more reliable since he produced a 2nd place
in the CSIYH then the following day in the seven year old final less than one second off the winner's time.
– Deese de la Sure was placed over 1m40 and only missed qualifying for the jump off in the Grand Prix.